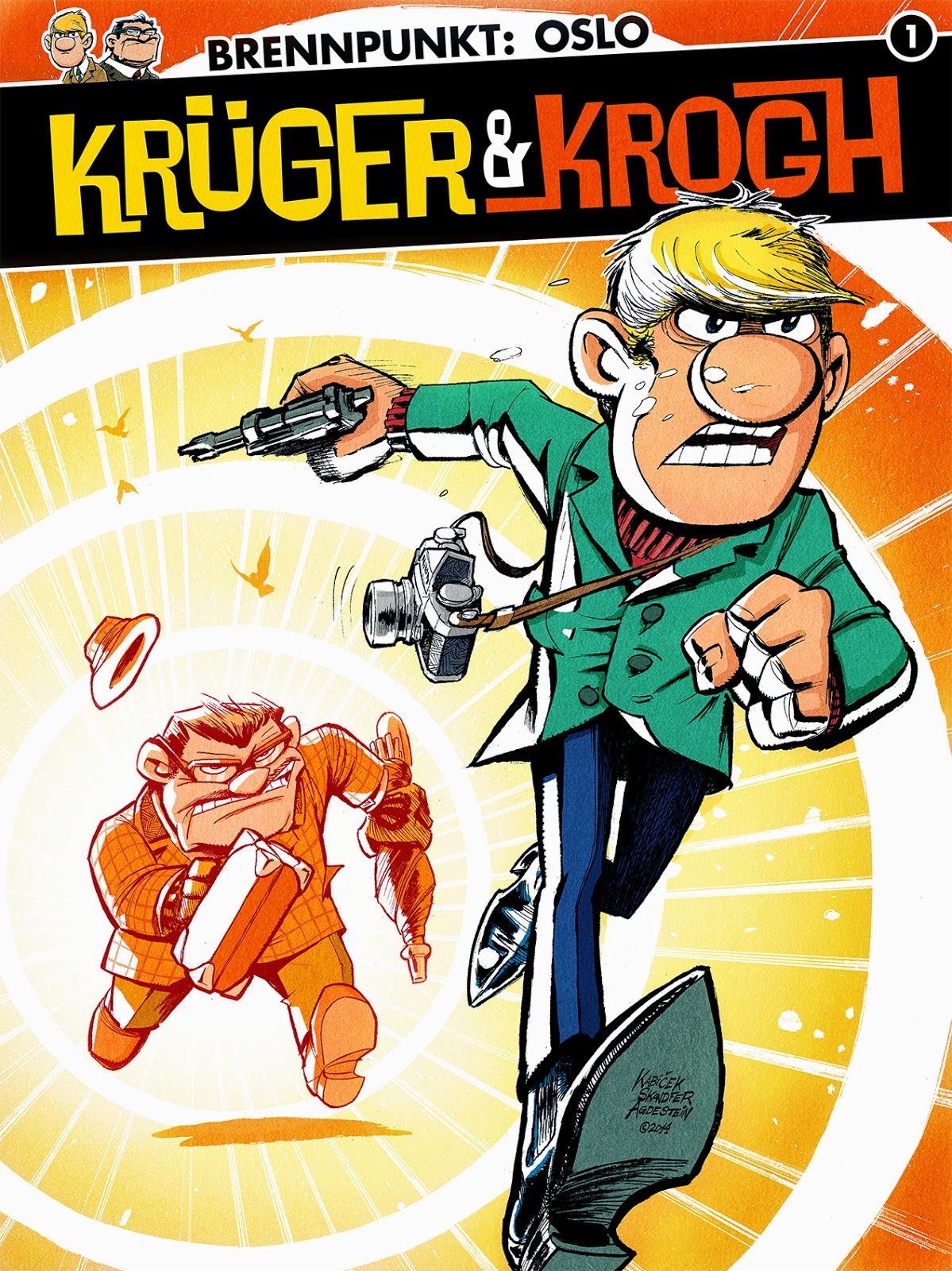 Last week, one of the most anticipated, Norwegian comic books for years debuted. The album (or graphic novel) Krüger & Krogh – Brennpunkt: Oslo (“Ignition Point: Oslo”) had already been in the planning stage for years when animators Ronald Kabicek and Endre Skandfer presented the project at Oslo Comics Expo in 2011. Following a massive hype in the wake of their presentation, Kabicek and Skandfer has been working on the comic ever since, though the lion’s share was done by main artist, Bjarte Agdestein. Returning to the OCX this year, all three co-creators were happy to announce that the first story was ready at last, all written, drawn, and colored.

Krüger & Krogh is a milestone in Norwegian comics. While funnypage strips like Pondus and Nemi has a huge audience and many “artsy” Norwegian graphic novels like Munch and the works of Jason has won great critical acclaim both home and abroad, the market for action and suspense comics is small, and it keeps shrinking. Krüger & Krogh is rather unique in the sense that it’s a good old-fashioned album comic and an action comic with humorous undertones. The art style is continental and can easily be compared with Spirou Et Fantasio when it comes to both art and storytelling. However, in an interview I did with artist Agdestein, he informed me that the comic is heavily inspired by The Avengers – the sixties British spy tv series, not Marvel’s superhero comics and movies. 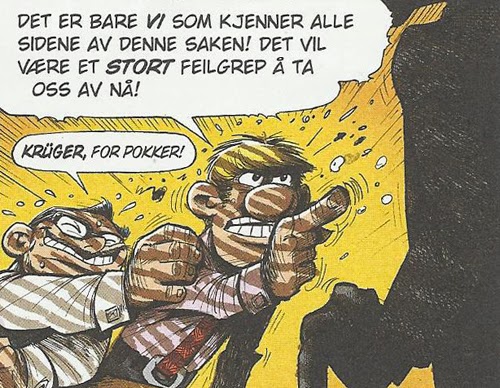 Like all proper fiction detectives, Krüger & Krogh has to be taken off the case before they can solve it.

Like John Steed and company of The Avengers, Krüger & Krogh are secret agents. They are the classical odd couple: One young, the other old, one impulsive, the other by the book, one skinny and tall, the other short and stout, etc. But they are partners, working for Norwegian intelligence’s AFMA: Avdelingen for Mellemliggende Anliggender  - «the Department of  Intermediate Affairs».  «Intermediate» in this case is a discreet word for «anything we need to keep secret from the public because it’s too dangerous and in some cases inexplicable”. Also, like “The Avengers”, “Krüger & Krogh” takes place in the sixties. This is apparently much due to Agdestein’s fascination with the decade (he’s even in a retro sixties rock band). That also makes it easier to take historical events into the context – For instance, in “Brennpunkt Oslo”, the takes place against the backdrop of Martin Luther King jr’s visit to Oslo to receive the Nobel Peace Prize in 1964.

It’s hard to say for sure where this comic goes in the long run, but in “Brennpunkt Oslo”, the genre they’re going for is clearly secret agent action with some sci-fi elements. It looks great, the dialogue is clever, and it has some quite satisfying action sequences. While there are no plans to do it yet, I’m wondering if it would be possible to export this comic. I can see it being difficult, considering how it has a provincial focus. While it’s well enough known that Luther King won the Nobel Peace Prize, every other aspect is tied very specifically to Norwegian history and to Oslo in particular. 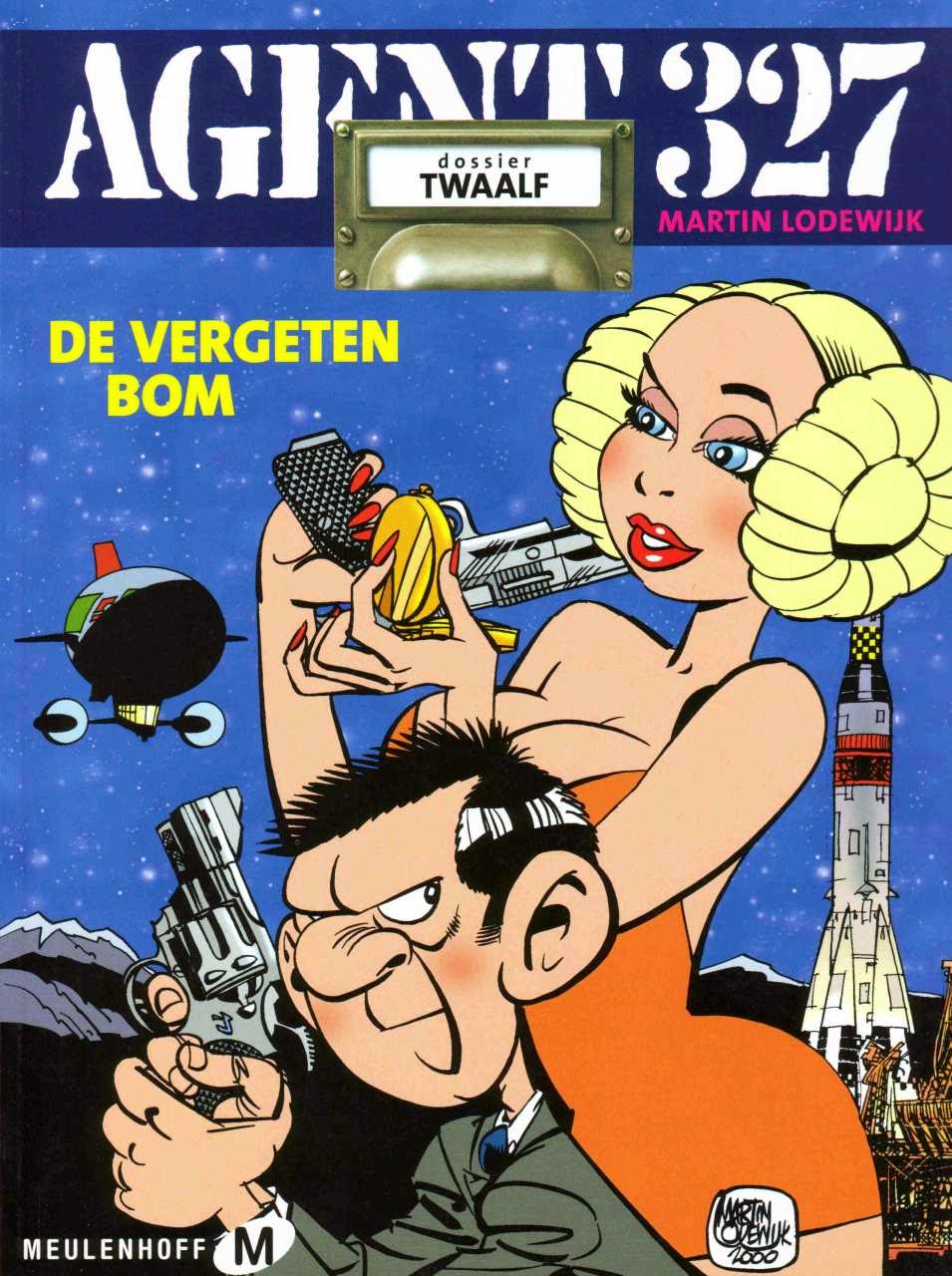 And unless it’s U.K. or the U.S., it’s hard to convince foreign readers that the affairs of any country’s intelligence service matters, or even makes for interesting entertainment. But there are exceptions. Martin Lodewijk’s comic book Agent 327, which is basically a Dutch James Bond with some comedy and supernatural elements thrown in, has been around since 1975. It consists of 20 volumes, and is still in production. Despite being very specifically set in Amsterdam, with the title character working for Dutch intelligence (though he also travels around the world) , the comic has been translated to several languages. It was even published in Norwegian for a while in the late eighties. And no offense to any Dutch readers, but Norwegians do not care about your affairs - Unless you are Olympic skaters competing against Norwegian ones. The Spanish Mortadelo y Filemon may also qualify, although that comics’ appeal is its surreal, whacky humor rather than its paper-thin, token spy plots.

So it can be done, if only the quality and commitment is there.  For the moment, the creators and publishers have enough of a job establishing Krüger & Krogh in Norway. But I think this comic has potential to go beyond that eventually. The whole gang is here! Krogh (from the left) and Krüger with their creators Endre Skandfer, Bjarte Agdestein and Ronald Kabicek.

To read more in English, check out Endre Skandfer's home page (admittedly, the information is a bit dated) and the Tv Tropes page I made on Krüger & Krogh)