THE ALLURE OF REALITY

Famed American non-fiction cartoonist visited Bergen, Norway, last weekend during the literature festival “Verden i Bergen” (The World in Bergen) to talk about non-fiction work in comics. Serienett had a word with her after her lectures. 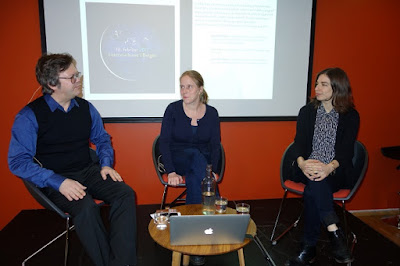 Sarah Glidden, on the left, in the company of author Øyvind Vågnes (right) and Norwegian artist Lene Ask (middle)

What influenced you to specialize in documentary comics?

It’s something I just kind of moved into, from doing memoir comics and autobiographical comics. Journalism and non-fiction is just what I’m interested in, I’m just following my curiosity. In this instance, we curiosity was how journalism works in the first place. So I made a book about my friends, who were reporters, and followed them on a journalistic project that became this book. Through doing that, I learned more about how journalism is made, and it became something that I started doing myself. Journalism is a great excuse to just follow your curiosity and make work about it.

Memoir and autobiography is in the same family as journalism. You’re telling the truth, writing and drawing what’s actually happened. For me it was easy to transition into this, for a lot of the memoirs I had done before, was related to current events. So it involved a lot of research, and a lot of looking into things that were happening in the world outside of my own life. 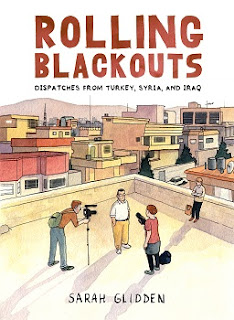 Sarah had a break-through of sorts with "How to understand Israel in 60 Days or less", a graphic novel originally published by Vertigo/DC in 2010. This was based on her observations from a "Birthright Israel" journey that she underwent in 2007. It was succeeded by her largest body of work to date, "Rolling Blackouts", a graphic novel dealing with the war in Syria and Iraq.

Aside from your Jewish heritage, what makes you take an interest in the Middle East?

I think the U.S. is obsessed with the Middle East, sometimes to the dethronement to other places we don’t pay attention to, what’s happening in. Latin America, for instance. Even though our politics are very much involved with Latin America for a long time. But the Middle East is where the media focuses. Even if I wasn’t Jewish, I’m coming from a place where it’s in the news every day. Obviously we have wars there, that we started, we have resources there that we would love to exploit. So it’s a place and a region that America has a lot of interest in, in general. For me, my interest grew after 9/11. Immediately we started talking about going to war. I was 21 at the time, and not really that plugged into what was going on. I didn’t know much about politics, and my reaction to that attack and the media coverage of it was: what exactly has our country been doing to the Middle East, why is this happening? So I really wanted to look into the politics of the region, and how America’s been involved there. You know the kind of stuff that’s not in the news every day, but you need to have the context to understand what’s going on.

The title "Rolling Blackouts" refers to electricity savings used in the Middle East, in this case in the Kurdi-Iraqi city of Sulaymaniyah.

How did you take an interest in making comics at all?

I always drew. I always knew I wanted to be some kind of artist since I was a kid, but I wasn’t really sure what kind. And now young girls have a lot more comics that they can identify with. But when I was growing up, there weren’t a lot of comics that a girl could feel was made for her. And I’m not even talking about “girl comics”. There were boy comics, but there weren’t gender neutral comics.  At least that’s how it was in the States, I think it’s different in Europe. Now there’s tons, but when I grew up, it didn’t seem like something that was interesting and that I could do. I wasn’t interested in superhero comics, and it wasn’t until college that I started reading stuff like Maus and Persepolis and Joe Sacco’s work, and then I realized: Oh comics, can be about serious things, they can be about real life. It’s not like I read Sacco and was thinking, oh I can do that, It was more like I was reading these things and then I found other work from people who were doing journal comics. Like James Kochalka, who did “American Elf”, a daily comic about his life. That is when I said, oh okay, that’s maybe something I can do. I can do comics about my life, about “slice of life” stuff. And so it wasn’t until later, when I had done that for a while, that I felt comfortable trying to move into more serious subject matter.

Besides Sacco and Kochalka, do you have anyone you want to give honorable mention as inspirations?

I don’t read a lot of comics, actually, I read more prose. And so a lot of my most major influences for the work that I do now, are journalists – Or just writers: David Foster Wallace’s outlook on the world really influenced me a lot, just because of the way he could look from the outside, but he also had a lot of empathy for human beings, he didn’t talk down to people.

The thing with journalists is they’re not often famous the way novelists are. But really good narrative journalism, I really love the work of Lawrence Wright, he did a book on scientology and another on Al-Qaida. And these journalists who do work on really complex things and make it accessible for a general audience.

During her lecture in Bergen’s House of Literature, Glidden explained how she works when she’s out in the field: She makes recordings of as much as possible, she makes very quick sketches whenever she’s at a place where the use of cameras is restricted, and otherwise photographs everything. While her artwork might be simplified, she wants it to be recognizable, so that a street corner in Damascus, for instance, looks the same in her comic as it does in real life.

One of the reasons why Sarah Glidden takes so many pictures, is because she never knows what she will decide to focus on for good effect. A simple plastic chair, for instance, might make a foreign enviroment seem a little less foreign to the western reader.

But when she gets home, with all of her recordings, sketches and photos, where does she go from there?

I start by transcribing things. Although these days, I don’t transcribe everything the way I did when I was working on Rolling Blackouts, but I go through all of my recordings and notes and tries to organize things into different sections, categorizing my reference material. It’s like I’m tangling a big knot. There’s not always one entry point, you can work with it from a lot of different angles. It’s like taking this mass of material you’ve gathered and try to figure out what your story is, what your angle is, and what are the universal themes you’re going to be looking at. I think that narrative non-fiction is not just the story about the thing it’s ostensibly about. You’re also trying to touch on other things that are more universal, that can speak to other issues besides the one that you’re reporting on.

Sarah would rather not have her characters use another language in the comics than when she met them in real life.

But do you feel it’s easier to gain people’s trust when they know you’re only going to expose them publicly in relatively simple drawings?

It’s easier to gain people’s trust, I think, because they don’t take you seriously - Maybe as a cartoonist, but also as a woman. A lot of times, especially when you talk to men, they’re not as intimidated by you. You’re just some lady with a sketchbook, and maybe they think that you’re not even going to publish this. And so I find that it’s easier to sneak in and have someone talk to you frankly because they’re not afraid of you, in a way. Which is nice, but it’d also be nice to have some respect sometimes.

Glidden’s next big project will be about climate change:

It’s still in the quite early stages, but I’m interested in doing some quite substantial work on this subject. I think that comics has the power to get people to look at something that they might otherwise ignore.  We see a lot of articles and images and text in our lives these days, but still a hand-drawn image makes people stop, and maybe it can trick them into reading something. And I think that climate change is something that, at least back home in the States, people either deny that is happening, or they know that it’s happening, but they just don’t want to look at it, because it’s too big, too sad or scary. And so I really want to use comics to talk about how it’s already affecting people all over the world. In the United States also, people are being displaced already by climate change, storms and drought. 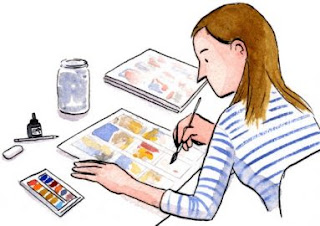