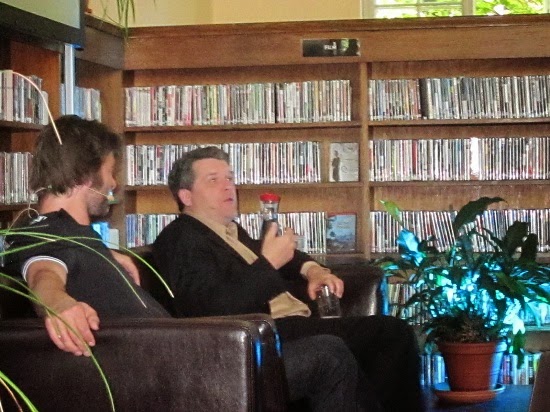 Peter Bagge of Hate fame was the main attraction of this year's festival. He made it clear that he regards the nineties as his giolden age, but still makes comics to this day. His most recent work is the comics biography of Margaret Sanger. Above, he's seen discussing his career. Below, he's seen signing comics for fans. 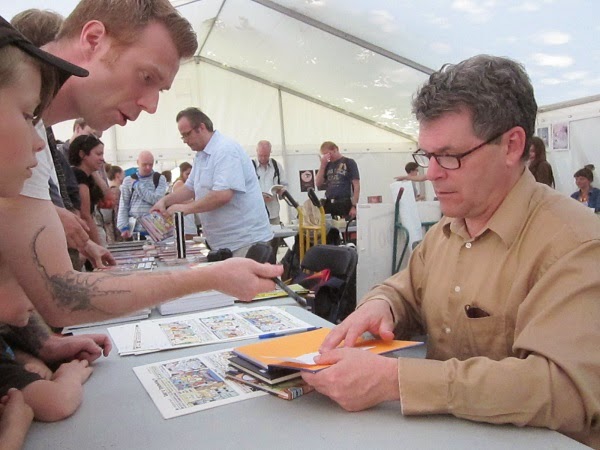 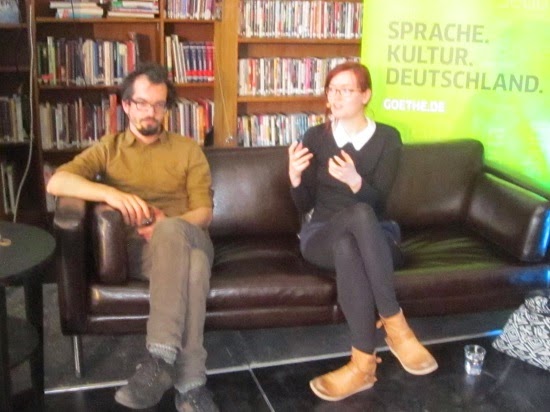 Sascha Hommer (from the left) and Olivia Vieweg, two of Germany's most interesting comics book writers/artists both turned out to have a very rich and diverse bibliography. 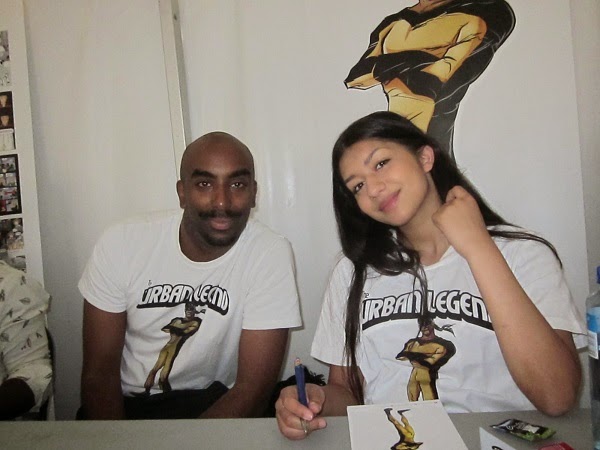 Eritrean-born Josef Yohannes (from the left) is Norway's first succesful black comics creator. He is the creator of the superhero Urban Legend. 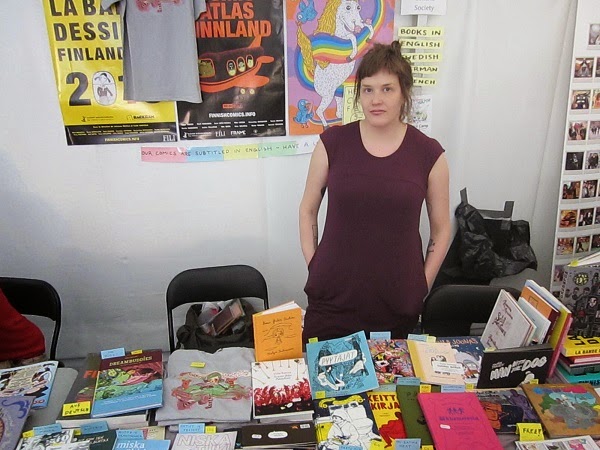 Aino Sutinen is a representative of the Finnish Comics Society. Finland has a rich comics enviroment, and Finnish creators frequently make themselves seen at Oslo Comics Expo. 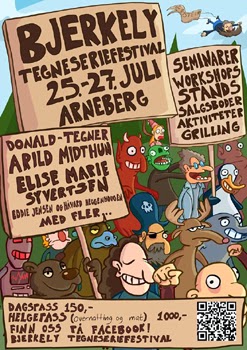 In recent years, comic book conventions have been popping up in Norway at an impressive rate. And while not all of them can expect to survive in the long run, there are now two major conventions: OCX in Oslo (which I will come back to towards the end of the week) and the long-running Raptus in my hometown Bergen. In addition, there’s a third one being arranged in Kristiansand this year, and much to my surprise, a new one showed up out of nowhere a few weeks ago.

The new convention is named Bjerkely named after the school it’s being held at. Bjerkely is a folkehøyskole, an institution which, according to my dictionary, translates as folk high school. However, this literal translation isn’t very informative, so allow me to elaborate. A folk high school is a progressive boarding school that offers a breather year between high school and college/university where you can develop your more creative skills by choosing a specialization. These schools are very much a Scandinavian phenomenon, although schools with a similar concept can be found other places in the world.  I took a year on such a school myself; unfortunately, “comics” was not on of the list of specialization subjects I could choose from.  But more recently, that subject is being offered at certain schools, and Bjerkely was the first one in Norway. 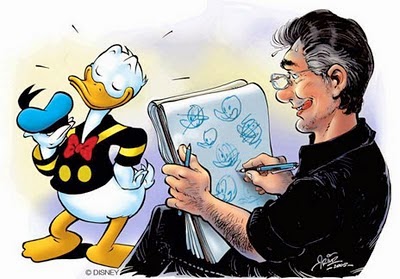 The idea apparently came from the school’s primary comics teacher Cathrine Eriksen, who have invited, amongst others, Arild Midthun and the team of Håvard Heggenhougen og Eddie Jensen. Arild Midthun (see self-portrait pictured above) is one of Norway’s finest and most professional cartoonists, and currently one of the regular, international Donald Duck artists - A tremendous honor for any Norwegian cartoonist, believe me. Last week, he won the aforementioned Sproing award for his Christmas annual story of Uncle Scrooge’s childhood.

(By the way, I am taking this opportunity to remind everyone that it's Donald Duck's 80th birthday today) 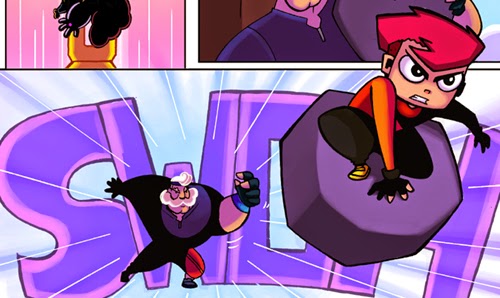 Heggenhougen and Jensen are the creators of Grapple Seed, an English-language webcomic currently well underway (see sample pictured above). I might be back with a review of that one later.  Heggenhougen and Jensen are also former students at Bjerkely. For some of the guests this is just as much a reunion as a convention, Cathrine comments, although she is determined to make this convention a family friendly festival for the general public.

Anyway, the convention won’t take place until the end of July; I will probably be back with more as the time draws nearer.
Lagt inn av Trond Sätre kl. 06:13 Ingen kommentarer: 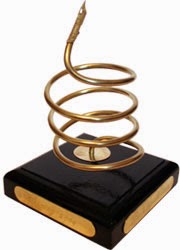 Norway have, or has had, several minor comic book and comic strip awards, but only one that seems to have any lasting power and influence. Or at least that's how it used to be.

I'm talking about the Sproing award, named for the onomatopoeia used to describe a breaking spring, and shaped like such a spring - with a pen split on top. It has been handed out by the Norwegian Comics Association every year since 1987, with the two primary categories being "best Norwegian comic" and "best translated comic". Some years there's been extra categories like "best debutant" and "open category". This year, they are down to the two former categories only, but there's an ongoing discussion about the categories, and how you qualify for a nomination. This discussion heated up last Sunday, when journalist Walter Wehus wrote a commentary informing us that Oslo Comics Expo would refuse to host the awards ceremony this year. Wehus supported this decision.

The cause of conflict is a rule stating that collected editions cannot be nominees for the award, unless the comic was first printed the same year as the collected edition came out. This means that last year's most important comics release, Steffen Kverneland's critically acclaimed comics biography on the life and art of Edvard Munch, is disqualified because the indvidual chapters have formerly been printed in a series of anthologies. Kverneland's book, simply entitled Munch, is translated into more and more languages and even won the Brage Award - Norways's most prestigous literature award - in the category of best non-fiction book. But because of a technicality, it was disqualified from being a Sproing nominee. 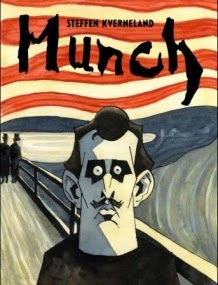 Another graphic novel that was disqualified from being a Sproing nominee for exactly the same reason this year is Herr Merz by Lars Fiske. This also disappointed many comic book aficionados in Norway.

The award ceremony have been moved from Oslo's festival tent to Bergen's main library, where I will attend tomorrow as one of the participants in a panel discussion. While I understand the Norwegian Comics Association's reasoning, I see the need to make the nomination rules less rigid, and will bring that up tomorrow.