AN AUTEUR WITH MICE AND MEN

I spoke with one of the great veterans in Czech comics, Lucie Lomova, just as she was about to finish the animated version of her most famous comic. 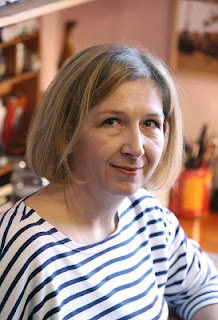 You have been in the comics industry for a long time. Can you tell us a little bit about how you got started? What made you decide to become a comic creator?

I always loved comics. As well as books, illustrations, and art. As a child, I just couldn´t decide if I should become a painter or a writer, but spontaneously I did everything. Later I realised that doing comics includes both writing and drawing, and it‘s the best tool for me to tell stories with. I started publishing strips and cartoons as a high school student. It was in the 80‘s, at the time when the communist regime was already weaker, but still at power. There were almost no comics at all in Czechoslovakia, as they were considered as a decadent western art-form. There were some comic features or strips, but only one journal with cartoons and strips, Dikobraz (=Porcupine). It proclaimed itself as a “satirical and humoristic“ magazine, but you can imagine what kind of satire it was, considering that it was published by the central comitee of the Communist party... But some good cartoons appeared there and it was immensely popular. Children had their Čtyřlístek (Shamrock) comic magazine. And few years later, Čtyřlístek became the harbour where my comics series for children, Anča and Pepík, landed for one decade. 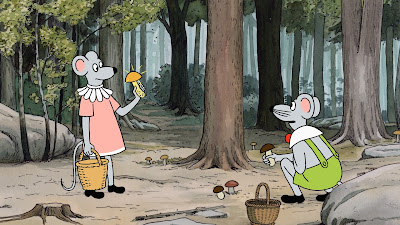 Anca & Pepík seems to be your most famous work. Why do you think it became so popular?

I don´t know,  perhaps because the stories are interesting and the children can easily identify with the main characters. Anča and Pepík are two mice kids, living in their tiny houses stuck to the wall. They experience different adventures, different genres, sometimes it´s a detective plot, sometimes it‘s a fairytale or an everyday story. The ambience is quite old-fashioned, which brings the feeling of security and the magic of „good-old-times“. Me and my sister Ivana created the two characters by chance. made the first story very spontaneously. Anča and Pepík just appeared on the paper and we had fun playing with them. When we were asked to do more episodes later, my sister didn´t want to continue as she had other things to do, so I did it on my own for next ten years, both writing and drawing. After more than sixty episodes I was exhausted and decided to stop. Buit it came back in another form, it was adapted for a puppet theatre and now we are finishing a seven-episodes animated series for Czech television. And this fall, the first two volumes of the complete Anca & Pepík comics are being published. 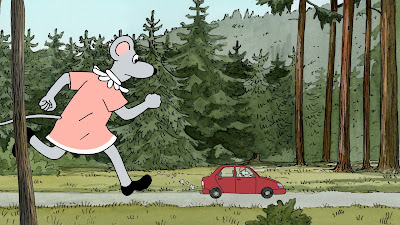 What was it like, working on an animated version of Anca & Pepík?

It was a lot of work, much more than I thought. In a course of three years I wrote seven scripts and made color model drawings for all the characters and objects, I was revising and correcting layouts and had drawn over 300 aquarelle backgrounds. At the beginning, I thought I would be able to do other things like comics besides this, but that was almost impossible.

It was a great chance to learn how classic animation looks like, to see all the phases of production. I met many nice people there and I am happy to have this experience. 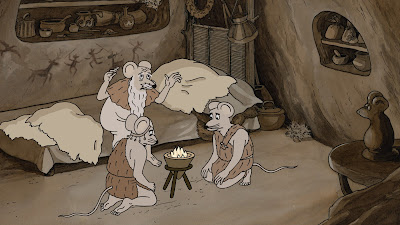 But when doing comics, you need to be extremely patient, to be able to stay glued to your desk for hours. And animation is an even more time-and-energy-consuming-activity. Also, in comics, you’re on your own, but on the other hand that means you can do whatever you want. It’s a One man or woman show. You are your own director, actor, stage designer etc.

What are your greatest inspiration, whether it’s within comics, literature or art?

It sound like a big cliché, but it´s the truth: my greatest inspiration is life, nature, everything I see and experience. I think a lot about light and lines, about the relation between line, color and light and I am trying to explore it and I am curious how the others deal with it. I like to look at other artists’ works and there are so many of them that I like! When it comes to writing, you can learn about theory and good advice and principles, but there must be a strong idea at the beginning, one that I fall in love with, and that will lead me through the entire project.

I don´t divide it so strictly. I think you have just few limitations when you work for children – not to use difficult foreign words, not too much irony or references known only to older ones etc. And the children need happy endings, of course. But the basics are the same. By doing comics for children I am pleasing my inner child; by doing comics for grown-ups, I´m addressing to myself, too. I like multilevel books for children which provide fun also to the parents. 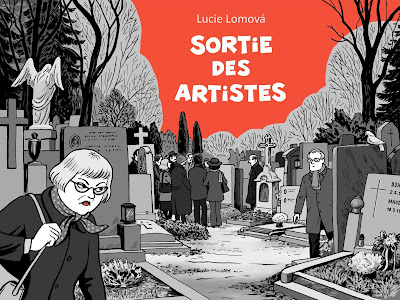 Komiksfest isn’t happening this year, but in addition to Natsucon, there’s KOMA in Brno taking place late in September. What are your hopes or wishes for the festivals this year?

It seems Komiksfest has ended forever, which I really regret, since it had become an important milestone in Czech comics life and history. The culture doesn´t get enough support from the state and it‘s so difficult to find other fundings. I visited Natsucon this year, which is mainly about manga, but this year there was a little section devoted to other, let´s say, alternative, comics, which I am interested in. This was also thanks to Kristian Hellesund from Bergen, who has been to Komiksfest  many times and he seems to know the Czech comics scene quite well. As for KOMA, I haven´t been there yet, so I can´t compare it with Komiksfest. Anyway, I hope that the future of Czech comics is bright and promising!