WHEN YOU'RE COMING HOME, DAD? 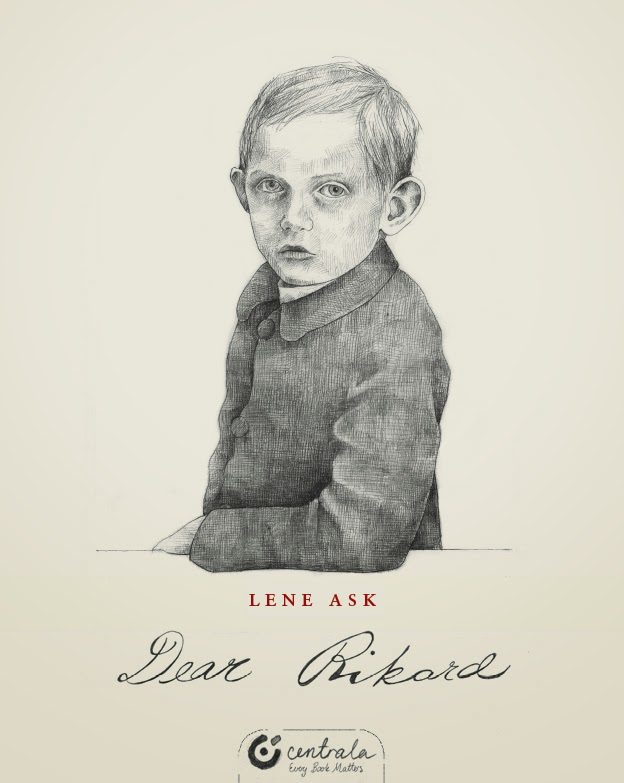 Lene Ask has her family background from the evangelical community in southwest Norway. Her graphic novels are influenced by this, especially her debut Hitler, Jesus og Farfar (Hitler, Jesus and Grandad). And even though she is no longer religious, she still respects her roots. If you know this, it’s not so difficult to understand why she was inspired to make Dear Rikard.

Ask now lives in Oslo, but she found inspiration for this work her native city Stavanger. More specifically in Stavanger’s Mission Archives, where the Norwegian missionary history is preserved life. The story Ask wanted to share, however, is not so really one about the people who went out to preach the gospel in foreign lands – But rather the ones who were left behind. Buried somewhere in these archives she found the correspondence between a father and a son: In 1892, widower David Jakobsen left Norway to work as a missionary at Madagascar, while his son Rikard, in his father’s absence, grew up at an orphanage in Stavanger. 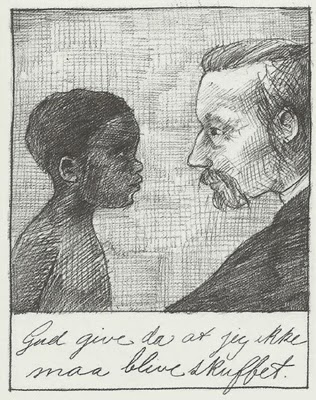 "God help me that I must not be disappointed"

The story, then, is authentic. Ask is showing tremendous respect for the original material, something which I also personally, as an employee, of state archives, appreciate very much. With the exception of some basic bibliographic data, the whole comic is told through Rikard and his father's letters to each other. The ornate font from letters are even reproduced exactly, which requires a little more time and concentration for the modern reader to follow. That’s a good thing, however, as this book should be read slowly and with reflection.

The pictures are Ask’s own, but again she strives for authenticity. To her Norwegian audience, Lene Ask is probably best known for drawing in an easy and naivist style, but has previously demonstrated that she fully able of drawing in more photorealistic styles as well. And of course, that’s exactly what she needed to do here: The drawings, which of course are in black and white, are supposed to resemble faded photographs. Even the design of the book follows this pattern; with its tall format and mat, yellow-ish binder, it clearly resembles an old family album. 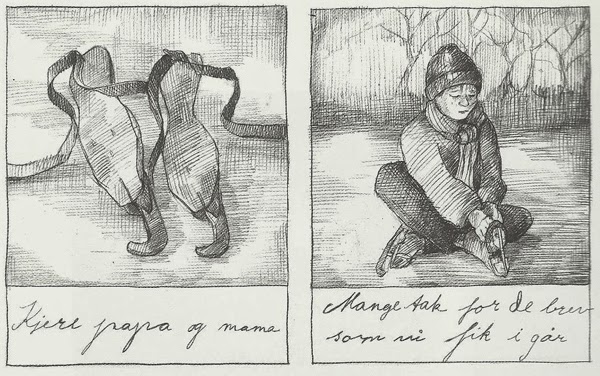 Dear Rikard is a triumph in so many ways. It’s unique, at least in Norway, both in theme and presentation, but is also a notable artistic achievement for Lene Ask. While she stays respectful to the original material, she still adds a lot to the story by her choice of motifs and facial expressions. She says a lot without adding any new words to those she found in the letters. But also through the choice of letters, she adds her personal touch to the story. The further into the story of Rikard’s childhood she gets, the more obvious is Rikard’s sense of loss and unhappiness caused by the absence of his father. Loss, but also the need to live with the loss and deal with it, is central to this tale. Without being melodramatic or sentimental in her imagery, Lene Ask has recreated an obscure but beautiful and melancholy tale and made it fit for a modern audience.


(Images from inside the book are reproduced from the original, Norwegian edition, since I haven't gotten the translated edition)
Lagt inn av Trond Sätre kl. 11:17 Ingen kommentarer:

This article is about a comics-based movie, and it might be more about the comics that inspired it. I’m not sure yet. 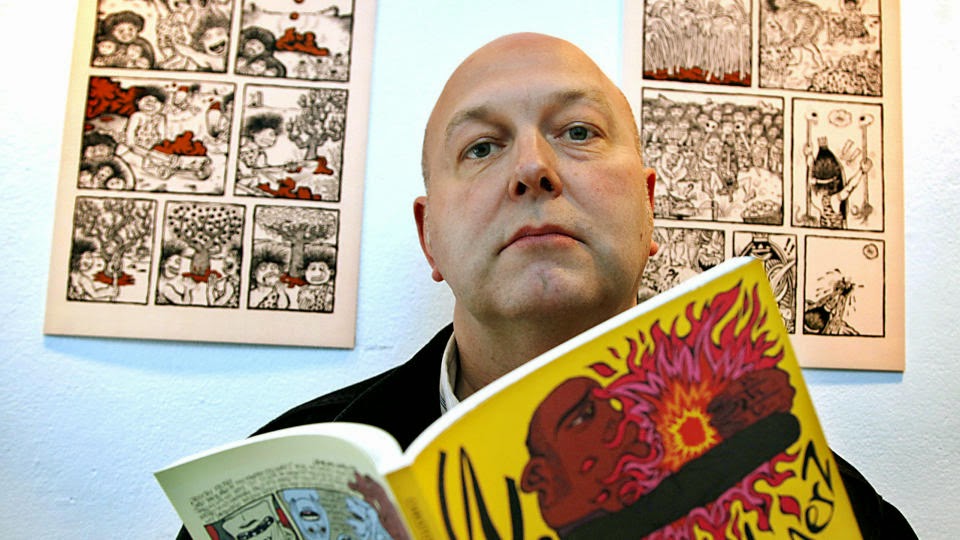 I recently reviewed the latest graphic novel written and drawn by Christopher Nielsen (b. 1963) one of Norway’s most prolific comics artist. Generally he works in a rough and direct style, inspired by the American underground comic tradition. He is especially well known for his subcultural depictions. 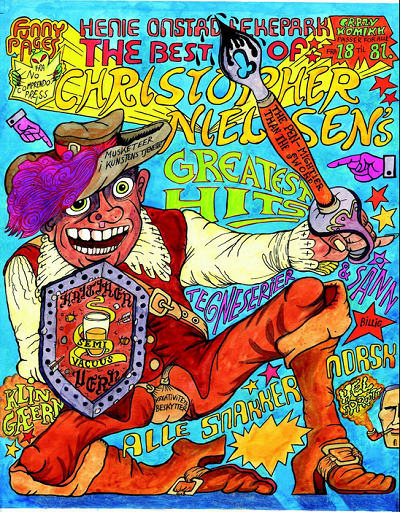 Nielsen got his first comics printed in 1980 after entering a competition arranged the Norwegian anarchist magazine, Gateavisa (= the street paper). Only three years later he got his first album published, and since then he’s been delivering anthologies and graphic novels more or less regularly. Nielsen, like so many great storytellers, frequently works within his own self-contained universe, which in his case is not a nice place to be. The “Nielsenverse” is a gloomy, rundown place populated by hooligans, layabouts, petty criminals, drug abusers and the occasional sane man who knows perfectly well what a hellhole he’s living in, and acts accordingly. It used to be centered around Oslo’s east side, but has gradually expanded geographically as well as socially. 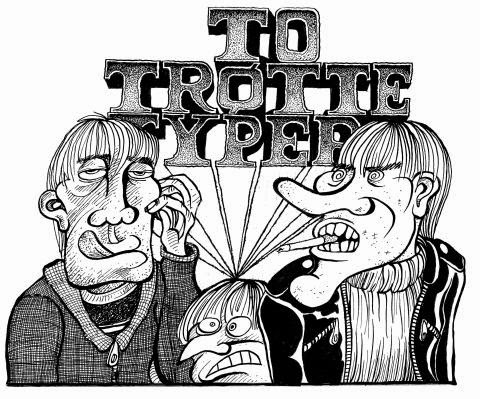 In later years. Nielsen has taken his universe beyond the comics pages and into theatre, television and cinema. His most famous cartoon, To Trøtte Typer (“Two Wasted Wankers”), depicts the life of the two drug users and petty criminals Odd and Geir living their relatively boring lives on Oslo’s east side. This comic was made into an animated series for television, running for 13 episodes (2000-2003) plus a Christmas special (2006). Some of his characters were also included in the jukebox stage musical Verdiløse Menn (= worthless men), which was based on the songs originally written and performed by his brother, Norwegian rock legend Joachim “Jokke” Nielsen. Jokke died according to rock’n’roll traditions from a heroin overdose at the age of 36, but left behind a huge legacy. Christopher is still building his legacy, and it’s getting bigger all the time. In January 2015, he announced his intention of getting in the Guinness Book of Records for doing work in the most diverse form of arts in one year. His claim to this record lies in the fact that in 2014, he produced a work of art in each of the nine art forms except for dancing.

HudMaSpecs (third from the right) and his crew

Nielsen had one chance of making his characters international household names. In 2006, after some delays, he finally released the animated cinematic movie Free Jimmy (original title Slipp Jimmy Fri) in 2006. This was the movie in which Nielsen’s movie universe was supposed to come together. In addition to Odd & Geir, it also starred another gang of characters that would be very familiar to fans of Christopher Nielsen’s comics exploits. Early in the movie, we run into a gang of hicks on their way to shoot moose during hunting season. The group is led by a bespectacled brute named Hold Brillan in the original and HudMaSpecs in the English dub. In both cases, the nickname comes from the fact that he always tells one of his (usually terrified) mates to hold his glasses when he gets into a fight (which he does very often). In the original, Hold Brillan is Trønder (central Norway); in the English dub he’s Scottish. There are some overlapping. popular stereotypes about both population groups, such as them being street book dumb, drunken, and prone to solve problems with violence. Despite being an exaggerated hick archetype, Hold Brillan has become one of the most complex and significant characters of the “Nielsenverse”, and the title character of Nielsen’s two most recent graphic novels. 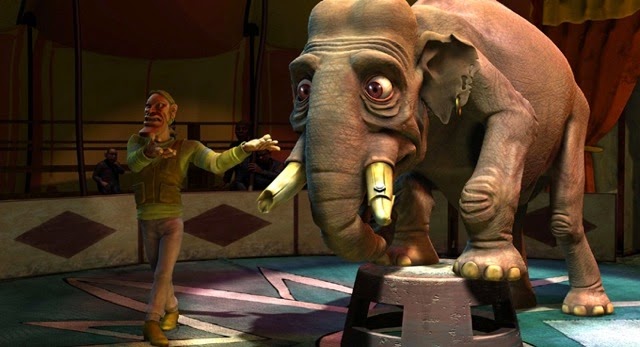 Getting back to the movie, it had a simple high concept that at the same time was very Christopher Nielsen: Odd and Geir are offered a part-time job as caretakers at a z-grade Russian circus. The offer comes from Roy Arnie, who clearly has ulterior motives. Sure enough, it turns out that the circus elephant Jimmy has a fortune in heroin sown into his body. Before too long, Odd, Geir and Roy Arnie are stuck between an aggressive animal rights group so full of straw you could use them all for scarecrows, Lapland biker gangsters, and HudMaSpec’s hunting team.

Free Jimmy never succeeded outside of Norway, though serious attempts were made to give it an international flavor: Celebrity voice actors Simon Pegg (Odd) and Woody Harrelson (Roy Arnie) were brought in to try and add to the movie’s credibility, and despite having several references to Norway, it’s kept somewhat ambiguous where the movie is supposed to take place at any given
time. 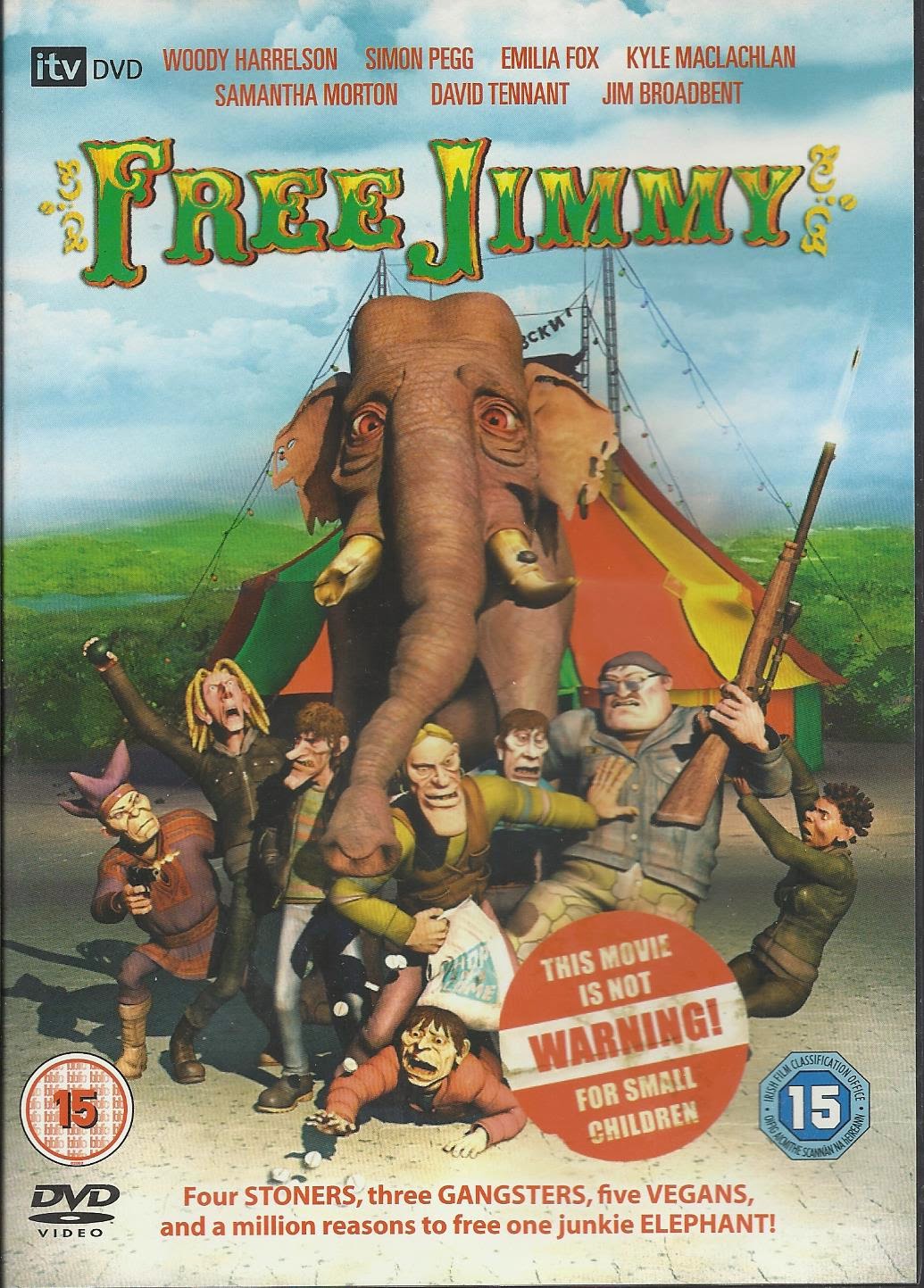 I managed to get hold of a UK copy of the movie (sadly, the Norwegian DVD didn’t include the English dub as a desired bonus material). And I have to admit that it’s a weird experience to see such specifically Norwegian (even regionally Norwegian) characters anglified. The accents are good, but arguably overdone. Simon Pegg and Woody Harrelson do a decent, but routine job.  James Cosmo as HudMaSpecs does the accent right, but fails to bring out the character’s hammy qualities. 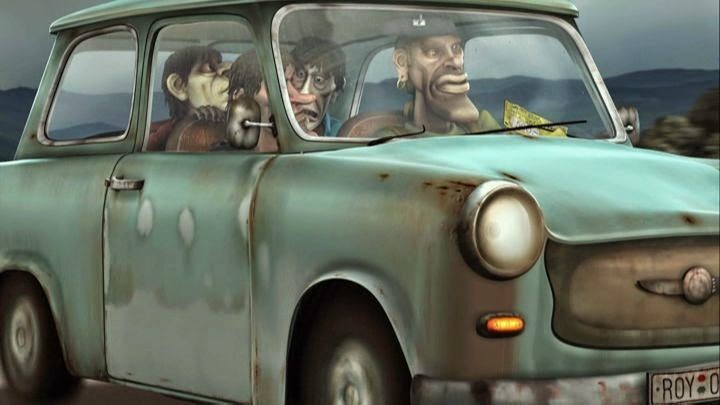 The few international critics who could be bothered to review the movie, were mostly unimpressed. It has a 10 % “fresh” rating at Rotten Tomatoes, the consensus being that it’s “a weird, misfiring, Norwegian animated mess of a film. Unsure of who its target audience is, it misses every target.” I beg to differ; the movie knew exactly who was its target audience was. Its target audience was fans of Christopher Nielsen, and that was its problem. It needed to appeal to people who were unfamiliar with his storytelling style to begin with, but the movie failed to bring those people in.  And so Nielsen’s core audience remains in Norway.
Lagt inn av Trond Sätre kl. 11:45 2 kommentarer: