In 1977, when George Lucas was told that Star Wars did great in its first week, he replied “Science fiction moves always do well in their first week. Let’s talk again next week.” While breakout successes still happens from time to time, this is not how the entertainment industry is working anymore. The probability of a new franchise being a success can, and will be, calculated well in advance, often with surprising accuracy.

Star vs. the Forces of Evil was deemed a success more than six months prior to the debut of its first episode.

Based on almost no official information, and a small handful of unofficial information (a cam copy of the title sequence, filmed at San Diego Comic Con and a few leaked storyboards), it rapidly gained a fandom.  A very enthusiastic and devoted fandom even, despite not having as much as a single episode to back up their devotion yet.

What it did have pretty early on, was a high concept:  Star Butterfly, the crown princess of an extradimensional kingdom, receives a powerful, magic wand on her 14th birthday. After failing to use it responsibly, she is shipped off to Earth to live with a suburban family in California. However, rather than living a normal life, Star continues to battle villains throughout the universe and in her high school, with the family’s teenage son Marco Diaz as her sidekick. 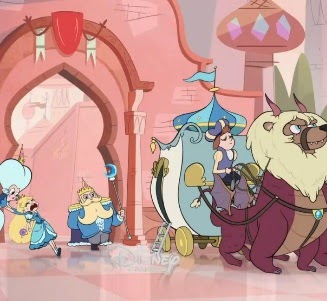 Comparisons have already been done left and right.  Comparing it to Sailor Moon seemed inevitable, but so far Cartoon Network’s StevenUniverse is mentioned the most. Both shows deals with a kid superhero of alien origin living in our world, and both shows are also created by women. Many animation fans think it was greenlighted because Disney wanted a rival to the popularity of Steven Universe (though creator Daron Nefcy had had the concept in her head since elementary school). Marvel’s Thor has also been brought up: Both Star and Thor are heirs to the throne of a magical, otherworldly kingdom, both possess a very powerful, magical handweapon, and both end up on Earth with a human sidekick. It’s even been accused of ripping off Fresh Prince of Bel Air because both shows are about a teen who gets shipped off to California after getting into a fight at home. If you ask me, the similarities to Thor are a little more obvious. 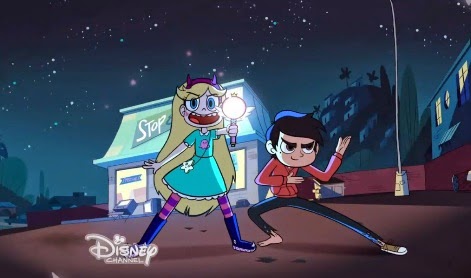 SVTFOE fans have already had their share of disappointments; the premiere was postponed from September 2014 to 2015. The pilot preview was then postponed from December 2014 to January 2015. Now everyone are so psyched for the pilot that for the moment they chose not to be disappointed by the possibility that the show will not be up and running for real for a couple of months yet. What’s a few months more between friends?  It feels like we know Star already.

But do we, really?

Yes, I think we do. There’s been some complaints that the show, and Star in particular, is too loud, too in your face. But that was exactly the personality she displayed in all of the preview material, so it shouldn’t really have come as a surprise. Star is bubbly, enthusiastic and hammy. It’s a personality we know very well from dozens of cartoons, one that works very well in the media, and one that I myself am weak for. Not surprisingly, her attitude rubs off on the show as a whole. It’s colorful, fast-paced and joke-heavy. The humor balances nicely between wild slapstick and the more clever moments. “Fish out of water” jokes, which is inevitable in any setting featuring an alien of sorts coming to earth, can be tricky, but this show handles them successfully. I was particularly pleased with Star commenting that she would never have guessed that Marco is related to her host family Mr. and Mrs. Diaz – She just figured that all earthlings were named “Diaz”. 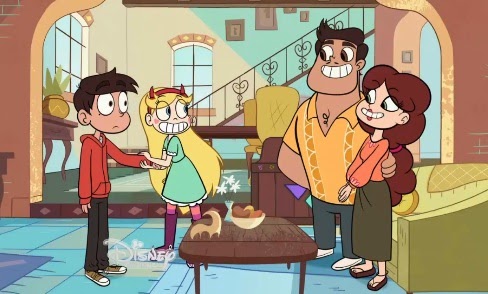 So yes, I did enjoy it, and I did laugh several times. But to be honest, it’s still easy to see a few faults, most importantly the pacing. It uses the 2x11 minutes format, which in itself doesn’t have to be an obstacle for smart writing and epic storytelling. Adventure Time and the aforementioned Steven Universe mostly use the 2x11 minutes format, and those shows can be both smart and epic. But Star vs. the Forces of Evil could use a little more time.

To be fair, this is mostly a problem in the first of the two 11 minute episodes, “Star comes to Earth”. As you can probably guess from the title, this is the episode that sets up the premise, but it feels like it’s cutting way too many corners to do so. We hardly get time to learn anything about Star’s native kingdom. We don’t get to see how she ended up living with the Diazes. We get to know very little about neither Marco nor Star’s social life before they me each other, or about Marco’s relationship with his parents. We don’t get to see him having any conflict with his parents about Star staying with them, and the conflict between Marco and Star feels forced and hurried.  There’s potential for a good story here, but it would’ve needed twice the running time. 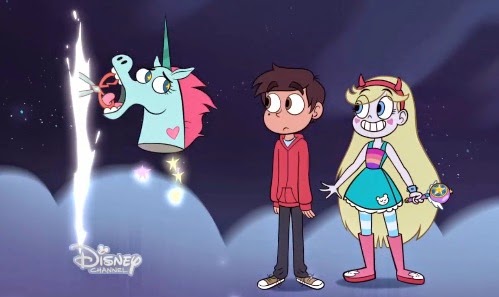 That said, the second episode “Party with a pony” is much better paced. It’s pretty random, and just like the first episode it’s based on a sitcom cliché (in this case the ”jealous best friend” motive) but it works better because it’s not getting too ambitious, and still has a sense of continuity.  So it would appear that already now, the writers are learning how to structure and pace the episodes better. I don’t see how “Star vs. the Forces of Evil” could ever become an epic on the level of Gravity Falls based on a starting point like this. Even comparing it to Gravity Falls (which a lot of people has already done) doesn’t make much sense to me. Both in comedy and pacing, it has much more in common with, say, Wander Over Yonder. It has potential to become its own thing, but it only remains to see if it will be used. We’ll see in the spring, when the Star saga starts for real, if it can turn into a real saga.
Lagt inn av Trond Sätre kl. 13:40 Ingen kommentarer: 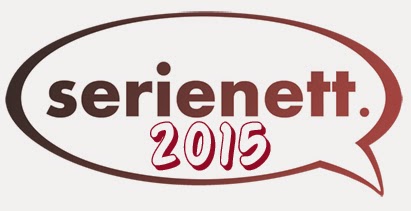 The website www.serienett.no had a good year. We increased the number of festival visits, field stories and interviews, and I established an English language blog for Serienett, after having wanted to make something like that for a few good years now.

After leaving this blog to wither for roughly for a month, it’s time to get back into action, and I start by making a few New Year’s resolutions.

As I was writing these, cartoons suddenly became major world news in a most tragic way. So I put this text and began writing a piece on Charlie Hebdo for Serienett’s main site instead. I considered translating it into English and post it here, but decided it would be redundant. There is nothing I can tell an international audience about Charlie Hebdo magazine and the killing of the four comic creators that haven’t already been covered in every possible way by world media already. Until I can find an entirely new angle – like Charlie Hebdo’s Mohammed cartoons being translated into Norwegian, for instance – I will leave the matter be. 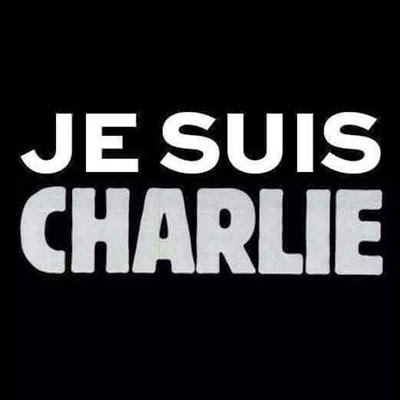 That leaves me then, with my plans for this site in 2015:

1.      This blog will continue to post information about comic news from Norway, especially when I think it might be relevant and interesting to an international audience.

2.     However, I also want to see the bigger picture, and think of comics in a worldwide perspective. The record-high numbers from Diamond Comics distributors suggest that comics is far from dead in the market, maybe not even dying. 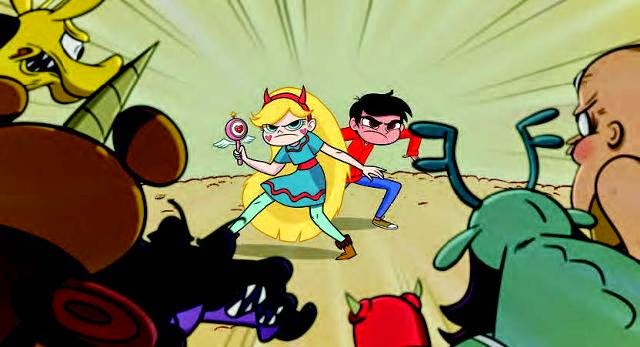 Star vs the Forces of Evil

3.      The blog won’t be exclusively and purely about comics, but also about related media. In fact, I have specific plans for that, including a review of the Star vs the Forces of Evil pilot episode and Big Hero 6 this month. American readers might wonder, if I wanted to review Big Hero 6, why didn’t I do it sooner?  Because it doesn’t actually premiere in Norway until late January.

4.      I will try and update this site at least once a week. I’m not going to lie, this resolution will be difficult to keep, but it’s a goal I really want to work towards.
Lagt inn av Trond Sätre kl. 13:32 Ingen kommentarer: