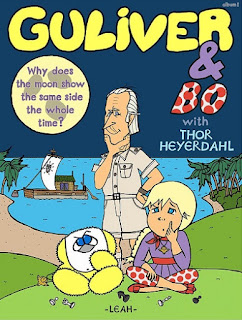 "Guliver& Bo" is an educational adventure comic for children, starring protagonists Bo, a young and energetic girl, and her companion Guliver*, a curious little alien who can travel in time and space. A so-called "audience surrogate", then, accompanied by a supernatural being; this is a well-known “odd couple” combination, and it works very well in this comic.

Their first album, “Why does he moon show the same side the whole time?” was published simultaneously in Norwegian and English early this summer.  While it the story starts out with exploring the question in the title, this is primarily the story of Norway’s most famous explorer Thor Heyerdahl (still an iconic figure in the eyes of the Norwegian people) and his Kon Tiki expedition across the Pacific in 1947. Guliver and Bo encounters the explorer when they travel to Raroia in the Pacific - initially to check whether the moon does in fact shows the same side on other side of the world.

This comic easily meets the first important criterion for an educational comic, namely to avoid being boring or preachy. The story is structured in an informal and entertaining way that children can enjoy. Humor is mixed with historical facts in a way that enhances both elements. A more detailed text, for those who want immerse themselves in the topics, can be found in the back of the album, but the comic itself has the right balance between text and artwork. 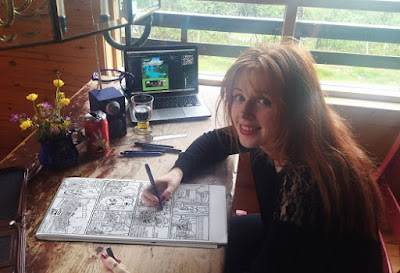 The artist/writer at her desk

Artist/writer Leah Laahne, formerly a UN employee with international relations as her special field, has already found her own style as a comic artist: Powerful lines, sharp edges, light movements, and eager, inquisitive facial expressions. Her style is distinctive, but easy to get into.

One problem with "Why does the moon…" as a debut is that the comic’s concept does not entirely come into its own in this first album. Due to a sponsor agreement with the Kon Tiki Museum, this particular story focuses on Thor Heyerdahl, and the title characters play a more passive role than they’re usually meant to have. However, Laahne have assured me that they’ll usually play a more active role in their stories, taking full advantage of Guliver’s aforementioned ability to travel in time and space. The connection between Guliver and Bo’s “moon mystery” and Heyerdahl’s Kon Tiki story is also a little thin. The two stories could easily have been told separately.

But this should be considered a pragmatic approach. By cooperating with an institution like the Kon Tiki Museum, Laahne has gotten a comic out and a foot inside the market. Hopefully, this will prove to be a good starting point. The adventures about Guliver & Bo have only just begun, and the road ahead, if we are to believe the previews, will be epic and action-packed.

*The name is a play on word, which is unfortunately lost in translation. Guliver is yellow, and “Gul” means yellow in Norwegian. His full name is obviously an allusion to Gulliver’s Travels. He’s named and modeled after Leah Laahne’s favorite childhood plush toy.