FROM POLAND WITH LOVE 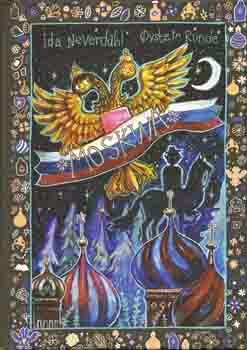 Although Lodz (pronounced "woodge") is Poland's third largest city, it comes across as rather anonymous. It lacks the rich cultural history of Cracow, and the metropolitan atmosphere of Warsaw. What it has, however, is Eastern Europe's biggest comic book convention. Both American superheroes (and Polish ones!), manga and European bande dessinée albums are all the rage, and the market is still huge. 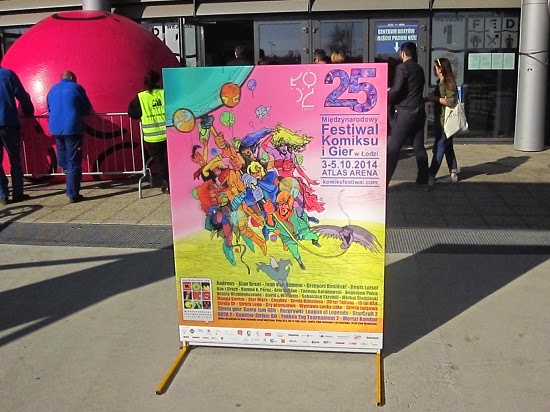 The entrance to Festiwal Komiksu

Festiwal Komiksu in Gier (comic and game festival) at Atlas Arena in Lodz is used to having big names on the guest list. This year, the con attendees had the chance to meet Jean Van Hamme, Grzegor Rosinski, Alan Grant, Arie Kaplan and Regis Loisel. In this company, Norwegian comics creators Øystein Runde and Ida Neverdahl could hardly expect to get the best seats in the house; they had to settle for lecture hall B and a table placed conveniently next to the festival shop where you could purchase their book, Moskwa (Moscow) in Polish. When they went on stage in hall B on Sunday, October 5th at 11.30 am, attendance was low, but it tripled during the lecture. 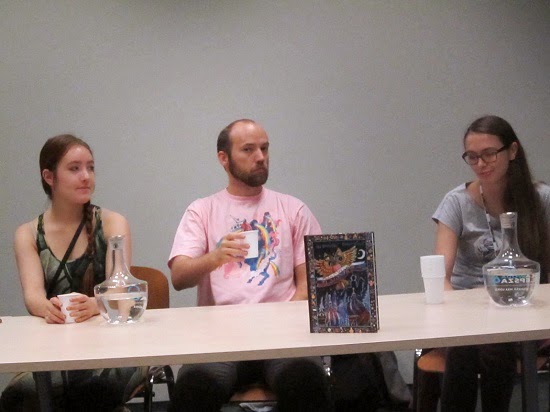 Ida and Øystein with their Polish aide

Moskwa (Norwegian title Moskva) was originally published in Norwegian in December 2013 as a collaboration project between Øystein Runde and Ida Neverdahl. Both artists had been guests at KomMissia in Moscow, Russia’s main comic festival, in May the same year. The comic is based on their fairly subjective impressions of the festival and of Moscow and modern Russia in general. 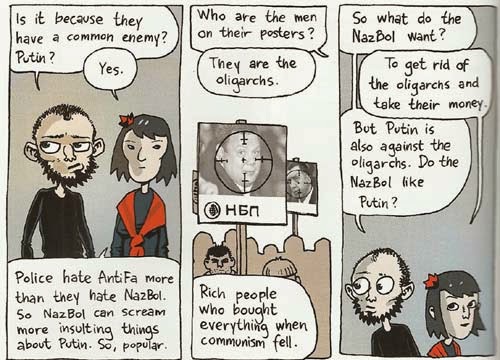 From the Norwegian edition, Øystein is having a conversation with the local guide in English

“Moskwa” has not been translated into English, but in the Norwegian edition, all the dialogue that takes place between the Norwegian protagonists and the Russians are rendered in English. In the Polish version, this has not been changed. Instead, the Polish translations are in the back. The Poles’ English is (in my experience) very variable, so it is quite possible that many readers must constantly flip back and forth in the book to understand everything. Was the Polish publisher okay with this?

“Yes it was his idea! It would have been no problem for them to do everything in Polish, but I think he thought this was a cool way to do it, to show that we are strangers in a strange land, that we struggle with the language. It was a logical, narrative technique”, says Øystein. 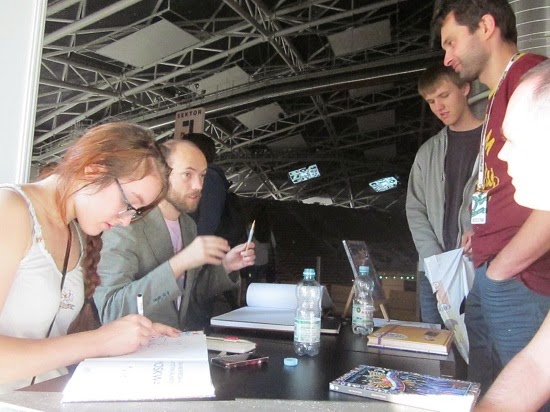 Ida and Øystein signing books at the festival arena