FROM MAD LOVE TO SPACE HEROINES

Swedish comic book writer/artist might be about to get his breakthrough in America. But his first breakthrough was actually in Norway. 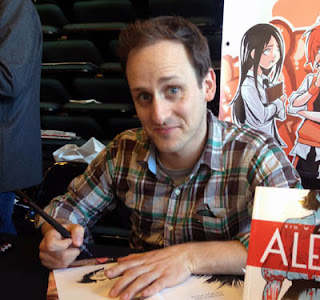 - I started drawing series maybe twelve years ago, he recalls when I speak with him during the Stockholm comic con. – Back then, made the same stuff as all other Swedish comic artists, black-and-white series about my teenage years, quite depressing stuff that ran in Galago (an indie Swedish comic book). But in secrecy I made the comics that I really wanted to make, and those were romantic horror stories. Where I got the idea from I do not know, but they were somehow always there: Short comics with a lot of color, and very dark, intense and funny stories. I was in Malmö at the time, and at a party I met the Norwegian editor Sigbjørn Stabursvik. He had a look at these comic pages in my studio, and told me they were awesome. Wouldn’t you like to run them in the Nemi comics magazine, he asked. 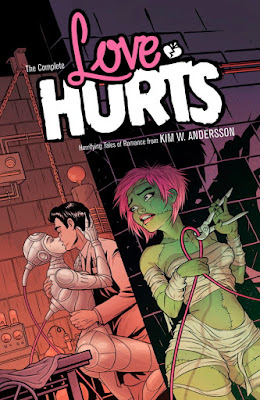 The U.S. cover of the first Love Hurts collection

Absolutely, Kim replied, and when Stabursvik asked him if he had more stories like that, he immediately promised to make more. That was the beginning of the series entitled “Love Hurts”. They debuted in Nemi in 2010, and Kim decided to focus entirely on these colorful horror comics. At the time, they were only published in Norway. Later, when he met Nemi creator/artist Lise Myhre, she suggested that he should get them printed in the Swedish Nemi magazine as well. She wanted to have them there.

After creating a series of romantic horror short stories, a longer story seemed like the next logical move.  - After the first Love Hurts collection came out, I wanted make a graphic novel, Kim explains to me. – A longer and more serious story. "Love Hurts" were kinda funny. Besides, I have many readers who are young girls, and I wanted to make something for them. So I made a story with only girls, where everyone from the hero to the villain are girls. And with a cool story! So I created the graphic novel “Alena”, and it ran as a serial in the Swedish Nemi magazine before it was published as a book. I'm very proud of it. 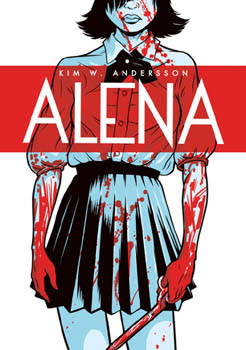 The way from a comic book to a movie tends to be very short in today’s media world, at least if you know the right people. And Kim does. “Alena” the live action movie will premiere in Swedish movie theatres this fall.  - To adapt a comic book into a feature film usually requires some changes. The film is a different medium, Kim says, and one must adjust. He helped writing the screenplay and was present throughout the process. But from the moment they started filming he backed down and let them do their thing. - The book is very much inspired by horror films, he explains, especially Brian De Palmas "Carrie," which I like very much, so it was very cinematic, and therefore perhaps a little easier to adapt. But I never thought it would actually end up on the screen, he admits.

But Kim has big plans beyond the movie premiere. He’s getting into the American market, and into science fiction. "Astrid: Cult of the Volcanic Moon" will debut on Dark Horse Comics next year. – Finally a recurring character of mine, he announces proudly. A few years ago, he came in contact with this important, American publisher, and since then he’s been involved in a couple of their anthologies. Dark Horse is also publishing the collection "The Complete Love Hurts", just in time for Halloween season this year. 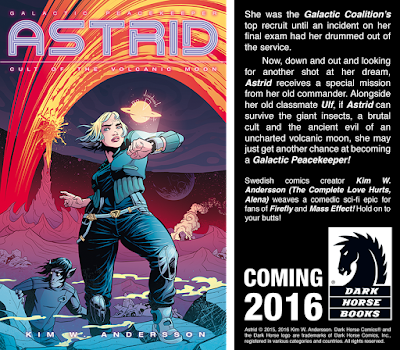 Kim refers to his new heroine Astrid as “Indiana Jones in space”.  Yet he claims not to be moving too far away from the formula. – There will always be romance in my stories, and there will always be horror, he says - So this is more about me taking my comics into space rather than me doing something completely new.
Lagt inn av Trond Sätre kl. 12:34